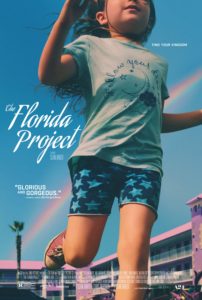 My movie review of The Florida Project, a brilliant film by Sean Baker made with an incredibly low $2 million production budget, is now live at The Independent Institute. At first, I didn’t think this was a great film—a good film, an important film, but not a great one. After a few days, however, I was able to deconstruct it and more fully appreciate what Baker had accomplished as a filmmaker.

The story is told from the point of view of six-year olds living in an extended stay hotel near Orlando, Florida. Their parents can barely make ends meet; they are literally a couple of ten-dollar bills away from being homeless. Since we are told the story through the eyes of children, adults end up connecting dots and filling in blanks through their ears and eyes.  Six-year olds can’t understand why or often even see why their parents or other adults might make really bad choices. But Baker gives us the clues through sight and sound to fill in the dots.

The story is told primarily through the eyes of six-year old Moonee. One particularly moving and poignant scene is when a “guest” of her mother, Halley, opens the bathroom door and finds her playing inattentively while she takes a bath. Moonee’s look is curious and surprised. She doesn’t understand why this man is her in hotel room. Moonee retains her innocence while the dialogue let’s the adults connect the dots. (The movie is rate R for very adult content.)

My overall assessment from the Independent Institute review:

The Florida Project, a brilliant new film by director/screenwriter Sean Baker (Tangerine, Take Out) explores the precarious world of people living just a few dollars short of homelessness through the ears and eyes of six-year olds. Baker balances adult desperation and childlike optimism, an enigmatic blend that creates a gripping story centering on an important if neglected rung of America’s socioeconomic ladder. It also may well earn The Florida Project a spot on the short list for several categories in the next round of major awards.