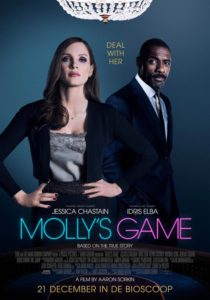 Molly’s Game is a just the kind of movie you would expect from Aaron Sorkin, the creative light behind TV series like The West Wing and movies like The Social Network. His fast-paced dialogue allows his characters to carry a lot of attitude into the movie and story, and Molly’s Game is no exception.

The movie stars Jessica Chastain as the title character, Molly Bloom, a former Olympic freestyle skier who ends up on another path after a career ending injury. She enters the world of high-stakes underground poker and becomes “Hollywood’s poker princess”–before the FBI takes her down. A key part of the film is Bloom’s tense relationship with her skeptical, high-profile attorney, Charlie Jaffey (Idris Elba). My full review is now live at the Independent Institute, but here’s a quick thumbnail summary:

As in most Sorkin scripts, Molly’s Game has many layers. He uses the unusual technique of having Molly narrate most of the movie. This useful device allows for the story to be told largely in flashback while creating tension with the no-nonsense Jaffey. Aside from the conflict between Bloom and Jaffey, the narration/flashback structure serves two other important roles. First, audiences see Molly evolve from a brash, arrogant, determined, Type-A athlete to a more humble and circumspect women who has been tamed by the cruel and violent world of underground gambling. She goes from bratty teenager to an adult with faults that are real and relatable. Second, audiences come to appreciate Molly’s personal journey through Jaffey’s skepticism, and then empathy. Just as Bloom appears to be at her lowest point, resolved to go to prison for decades because she won’t give up her clients, Jaffey is able to provide the support she needs because of his sincere belief in her innocence.

The movie appears to be a very faithful adaptation of the book of the same name by Molly Bloom: Molly’s Game: From Hollywood’s Elite to Wall Street’s Billionaire Boys Club, My High-Stakes Adventure in the World of Underground Poker.

I really enjoyed this movie, scoring it 9.25 (A- or a very high 3 stars), but not everyone will. I thought the filmmaking was inspired, and Sorkin, who also directed, definitely took creative risks. On the whole, I think the choices work.

Reviews at Rotten Tomatoes can be found here.

Reviews at Metacritic can be found here.