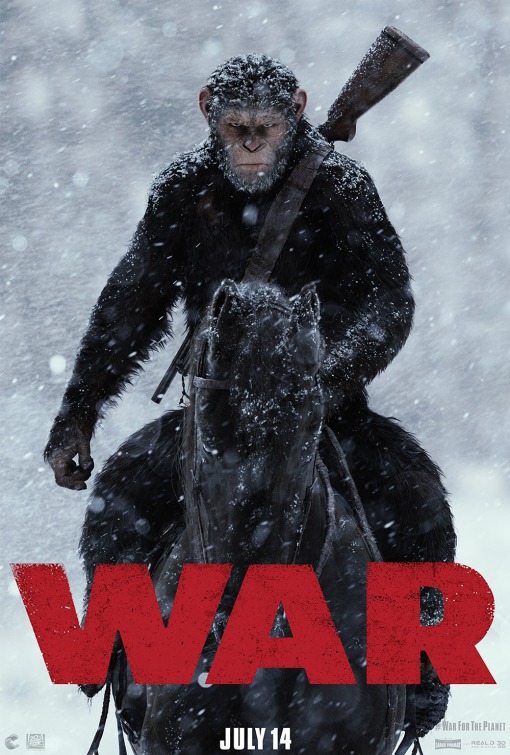 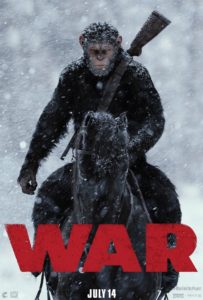 War follows the attempts by the leader of the apes, Caesar (Andy Serkis, The Lord of the Rings series, Rise of the Planet of the Apes, Dawn of the Planet of the Apes), to avoid a final show down with the humans. The human population has already been wiped out by a virus blamed on the apes—the Simian Flu—and a remnant of the human population is trying to preserve their owns species by destroying the intelligent apes holed up in the forests of the Northwest United States. Caesar’s ability to communicate and his intelligence are the product of human medical experimentation (and the subject of the previous two films). In War, the humans are led by the maniacal Colonel (Woody Harrelson, White Men Can’t Jump, Natural Born Killers, Hunger Games) who is intent on destroying the apes in what he terms as a “holy war” for the survival of mankind.

Caesar is morally and emotionally challenged by the deliberate if unintentional murder of his wife and young son by the Colonel and his soldiers. Their deaths spur him to hunt down the Colonel and kill him as revenge and retribution. Maurice, a wise and philosophical Orangutan (Karin Konoval, Diary of a Wimpy Kid, Rise of the Planet of the Apes, Dawn of the Planet of the Apes), provides the balance and metaphysical foil to Caesar’s charismatic leadership. The humans embody the dark side of humanity—unquestioned loyalty, willingness to uncritically follow leaders, the darkness that comes with succumbing to fear.

Screenwriters Matt Reeves (who also directs the movie) and Mark Bomback (Deception, The Wolverine, The Divergent Series: Insurgent) add important dimension to the story by introducing a young human girl into the story. After Caesar and his party kill her father, a deserter from the Colonel’s rogue army, Maurice refuses to leave her to starve or be killed in the wilderness. The girl’s innocence, courage, and willingness to look beyond her species to bond with the apes plays an important role in Caesar’s own personal transformation in his quest. Her role and acceptance also allow War to become more multidimensional than a simple ape vs. human tale, staying true to the franchise’s emphasis on finding common ground and overcoming prejudice.

ar for the Planet of the Apes is a fitting sequel to the previous two movies. The special effects immerse the audience in the movie, making the world of the apes as natural and accepting as human life in the real world. The action sequences keep the audience engaged throughout the movie even though the end is never really in doubt. Serkis’s acting gives life to his character in striking ways despite the fact the audience never sees human form. Harrelson finds a way to add dimension in the egocentric, brutal Colonel blinded by his own prejudice and self-righteousness. The screenwriters also do a nice job of infusing references to characters from the older films, giving those familiar with the original series a satisfying sense of closure. While the story is not fresh, the movie is done well.