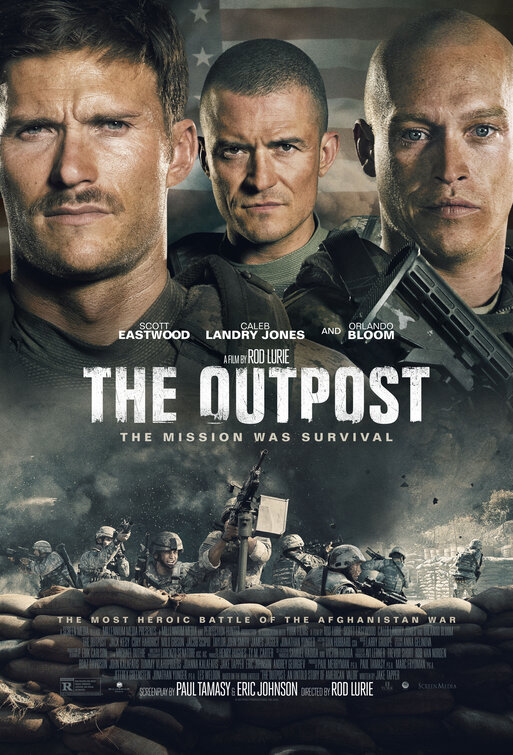 As America ends its formal 20-year combat commitment to Afghanistan, viewers might find The Outpost (2020) a sobering reflection.

The Outpost tells the story of Combat Outpost (COP) Keating during the Battle of Kamdesh in the war against the Taliban. It’s a gritty, unvarnished tale of failed strategy, heartbreak, and courage. The movie is based on CNN journalist Jake Tapper’s heralded book The Outpost: An Untold Story of American Valor.

COP Keating may have been doomed from the start

Combat Outpost (COP) Keating, is named after one of their commanders, Captain Benjamin D. Keating (Orlando Bloom). The outpost’s mission was to work with local Afghani leaders to win their “hearts and minds” by funding local projects.

Located at the base of three mountains, it’s defense position fundamentally compromised by geography. Insurgents can look down into the post from three sides, block any exit, and pick off targets.

But geography wasn’t the only disadvantage the soldiers faced. The deaths of two commanders and a series of short-term commanders rotating in and out sow confusion among the locals afghanis and demoralize the troops stationed.

A full throttle assault by what would be about 300 Taliban on the outpost is all but inevitable. The action is relentless. The risk and danger to the soldiers stationed there is palpable. In the actual battle, eight Americans died, 27 were wounded, and an estimated 150 Taliban killed. No one will doubt the valor of the men tasked with carrying out this mission and defending what ends up being the undefendable.

Valor of soldiers is palpable

The filmmakers do an admirable job trying to honor each of the participants. But keeping track of the different players is nearly impossible without a playbill with photos. Moreover, as the chaos erupts, keeping track of who lives and who dies becomes problematic for the audience. Then again, this reflects the confusion and terror of the battle.

Is The Outpost the Hamburger Hill of the Afghanistan generation?

The Outpost’s gritty realism is not for everyone. Some may be turned off by the misogyny, the foul language, and the bravado. But few recent films are as effective at bringing the danger, terror, and tension of modern-day warfare into your living room. The Outpost may be the Hamburger Hill for the Afghanistan War generation.

A victim of the Pandemic-induced closure of movie theaters in 2020, The Outpost is now streaming on Netflix.