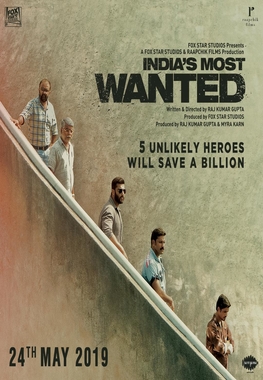 The decision on whether to formally review India’s Most Wanted, a Bollywood produced “action” movie, was difficult. Reviewers struggle to determine what elements of foreign produced films are culturally specific, and which ones are generally applicable. Bollywood movies typically fall into this conundrum for a variety of reasons (e.g., the inclusion of musical numbers in dramatic film).

On the upside, Western audiences will be treated to cinematography that captures sweeping vistas of India and Nepal. Their sense of place and custom will be jarred as they are transported into the crowded streets of Delhi, Kathmandu, and mountain side towns. They will also be forced to adjust to urbanity where four-wheeled vehicles are scarce, reserved for the wealthiest and most well connected. Most people will be riding on hot, crowded buses, or various forms of two-wheelers. They will see an authentic setting for the story. No attempt is made to project high-powered technology with fancy driving or stunts. The conditions remain grounded in the real-world technology faced by the men on the ground, including cell phones with little more capability than texting and talking.

India’s Most Wanted is inspired by the real events surrounding a secret attempt by Indian special police to infiltrate Nepal and nab a notorious terrorist — without firing a shot. The themes of bureaucratic incompetence and the heroic actions of the lead characters will not present a problem for most Western viewers; these are familiar plot lines and a staple of this genre. Western audiences will also probably find the low-tech nature of the search and capture mission refreshing. The film is low-budget by Western standards, meaning no CGI and limited practical effects. In the right hands, this can be play well. Unfortunately, “India’s Most Wanted” fumbles.

While audiences can certainly believe that the team in under imminent threat of discovery, and this will likely trigger significant negative consequences — national shame, ruined careers, an international incident that could trigger military intervention — few in an American audience will really believe the team is facing dire physical threats or death (even though they were). As narrative, the stakes are substantially lower. No amount of slow-motion video capture, dream sequences, deeply pensive camera shots with stunning sunset backdrops, or roughing up prisoners, is likely to overcome these lower stakes.

Thus, the hurdle for Western audiences will be their expectations. Action movies produced out of China, Hong Kong, Japan, and the West are fast-paced and physical. The heroes in India’s Most Wanted appear by Western eyes to be out-of-shape, middle-aged misfits. None, except perhaps the team leader, looks like they have stepped into a gym or physically worked out since their days of police training. This would be fine if “India’s Most Wanted” were a comedy, or even a “dramedy.” But movie is billed as an action-thriller. We are expected to believe the team is a serious threat capable of taking down a violent and dogmatic terrorist — which they did in real life — but on camera it doesn’t look they could job 100 yards.

The result is slow paced movie that never really rises to its action billing. On-line reviews suggest the film is doing better in India than in the US. American viewers, however, would be best to approach India’s Most Wanted as a cultural immersion more than an engaging, fast-paced ride. The movie is in Hindi with English subtitles.