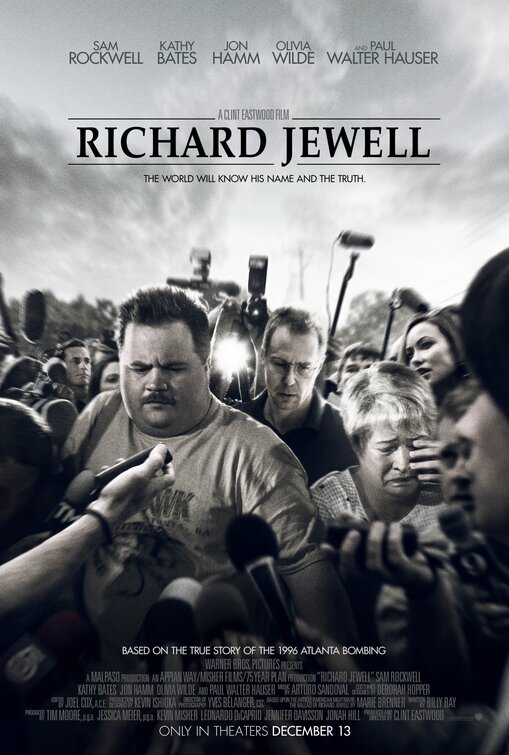 The debut of Clint Eastwood’s newest movie, Richard Jewell, has been marked by controversy. Ironically, this controversy is not focused on the quality of the movie itself. On the contrary, Richard Jewell shows why Eastwood is a master craftsman of modern cinema. Eastwood has given life to a story about an unremarkable person (Jewell) who was put in a remarkable position by doing nothing more than being the hero he authentically aspired to be.

Richard Jewell was the private security guard who discovered the pipe bomb that killed one and injured 111 during the 1996 Summer Olympics in Atlanta. (Eric Rudolph later arrested for abortion clinic bombings in 2003 and confessed the the Olympic Park bombing in a statement in 2005.)  Jewell was a former cop with a checkered but not criminal past, with professional troubles rooted in the misdirected self-righteousness that sometimes comes with imposing a strict personal moral code on others. While working as a college campus security guard, he pulled over people he suspected of drinking while driving, resulting in a charge of impersonating a police officer. He also received complaints from students who objected to the college’s no alcohol policy which Jewell strictly enforced. His inability to keep a steady job meant that he lived on the economic margins of society in an apartment rented by his mother, Barbara.

The movie, directed by Eastwood and based on a screenplay written by Billy Ray (Hunger Games, Captain Phillips, Terminator: Dark Fate), follows Jewell’s personal descent into hell when he is publicly tagged as the prime suspect in the bombing. Working off a vague profile of previous bombing and arson arrests, the FBI targets Jewell because he was a loner, aspired to be taken seriously in law enforcement, and believed he wanted the public notoriety of being a hero. For 88 days, the media vilified Jewell as the FBI and state police tried, and failed, to identify the Olympic Park bomber. The press jumped the gun based on a lead secured by hard-driving and ambitious Atlanta crime reporter Kathy Scruggs.

But is the movie any good?

In Richard Jewell, Clint Eastwood demonstrates his mastery of his craft. The movie’s pace engages the audience from beginning to end even though Jewell’s personality is low-key and understated. Eastwood carefully builds the story around Jewell’s character, both his virtues and his flaws. Indeed, it’s Jewell’s flaws that make him seem most sympathetic — he wants to do the right thing, and does, but his personality makes it difficult for him to interact smoothly with others. Overweight and out of shape, others around him are dismissive of his aspirations and abilities.

Most impressive in Richard Jewell, however, are the performances (another tribute to Eastwood as director). They are uniformly stellar and nuanced. Paul Walter Hauser (BlacKkKlansman, I, Tonya) plays Jewell with compassion, subtlety, and understanding. Easy to dismiss and trivialize because of his soft spoken demeanor, we see Jewell slowly engage his understated intelligence, common sense, and resolve as he becomes jaded by the FBI’s dubious investigative tactics. Kathy Bates (Misery, Fried Green Tomatoes, About Schmidt) provides an Oscar worthy performance as Jewell’s mother Barbara who is caught up and overwhelmed by the maelstrom of media attention. Sam Rockwell’s (Frost/Nixon, Vice, Three Billboards Outside Ebbing, Missouri) turn as Jewell’s reluctant attorney (Watson Bryant) adds an important edge to the story that is both advocate and foil for Jewell as his good-natured instincts lead him into traps. John Hamm (Mad Men, Beirut, Baby Driver) shows why he is establishing himself as one of Hollywood’s leading actors in his role as lead FBI investigator Tom Shaw (a character that is a combination of several agents engaged in the investigation). Olivia Wilde (Booksmart, Tron: Legacy, Drinking Buddies) plays the troubled, tenacious, “work hard play hard” reporter Kathy Scruggs with nuance and depth.

Richard Jewell is more than an excellent example of filmmaking. It’s also one of the few movies that takes an honest look at the human implications of a public rush to judgement that unfairly maligns innocents. In fact, the injustice was perpetrated by the federal government and the media — sometimes referred to as the “fourth estate” — may play into the anti-authority cynicism of libertarians and conservatives, but confronting the excesses in both institutions is critical to a well-functioning democracy. Narrative film, when done well, helps provide this balance.

The controversy over the film was apparently hatched by the very media that ignited the firestorm that under girds the movie’s main theme — a public’s rush to judgement. In the case of the movie Richard Jewell, the media is now claiming a foul by Eastwood for allegedly misrepresenting the very reporter (Scruggs) who everyone (including the media) agrees was at the center of the controversy.

While many in the media (and many movie critics) believe Eastwood (and by extension Ray) unfairly maligns Scruggs (who died in 2001 from an unintentional drug overdose), the director and screenwriter are well within artistic conventions. Directors, producers, and screenwriters often modify characters and plot points to fill the dramatic needs of their film.

Unfortunately, in order to avoid significant plot spoilers, this issue will be taken up in much more depth in a subsequent post. (Hint: Eastwood, Ray, and the actors should be crying foul on their media critics.)

In the meantime, as a narrative drama, Richard Jewell is timely, relevant, and well worth the time spent in the movie theater.