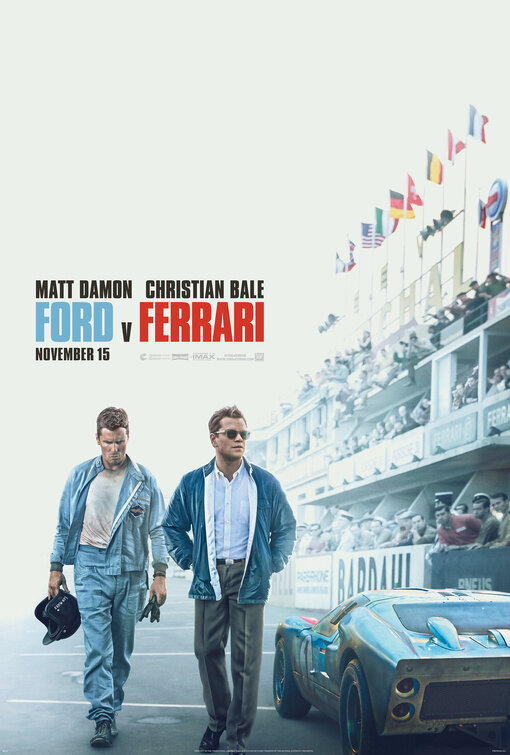 The setting for the ultimate showdown is the LeMans 24 hour race in France in 1966. The location is legendary in racing circles. The track is full of twists and turns. In other words, it’s an ideal setting for a slick, well edited movie like Ford V Ferrari.

The movie is well acted, anchored by authentic yeoman performances by Damon and Kelly. The supporting cast is also strong, ensuring that the film overall can showcase the talents of the two stars. Other characters don’t get the same latitude, defaulting into more two-dimensional roles.

The plot is also predictable and straightforward. The story properly focuses on the dynamic between Shelby and Miles. While corporate politics plays an important role in the story, the script has little nuance or layer. The entire rivalry appears to be driven by the ego of Henry Ford as he responds to a personal insult thrown by Enzo Ferrari (Remo Girone). Shallow business types more interested in show and marketing glitz insert themselves at key points at predictable points to keep the story moving. Historically, this story line does a disservice to Henry Ford II, who is recognized as a strong innovation-focused business leader and critical to Ford’s economic rebound after World War II. The movie is reduced to a simple formula of Shelby, Miles, and Ford’s personal quest to win LeMans.

Nevertheless, Ford V Ferrari is a story of an authentic rivalry and actual conflicts between colorful real-world legends. As a movie about racing and personalities, Ford V. Ferrari delivers. While its nomination as Best Picture is a bit surprising given the strength of other contenders in the field, the intensity and polish of the racing scenes buoyed by strong acting by Damon and  Bale give it a real shot of taking home the Oscar statuette for film editing, sound editing, and sound mixing.

Ford V Ferrari has been nominated in the following categories for the 92nd Annual Academy Awards: