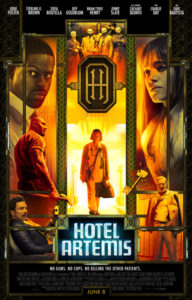 Hotel Artemis seems to have everything it needs to be a successful film but manages to fall flat anyway. Why is a bit of a mystery. The movie has a strong cast, and the characters should have enough back story to create compelling arcs that drive the movie’s momentum.

The slapdash backstory doesn’t help. The movie is set in riot-torn Los Angeles in 2018. Water has been shut off by the private contractor in charge of the water supply, although the reason is never explained. Gangs seem to run unchecked. Riot police patrol the streets keeping the mobs at bay. The city has imposed a curfew to quell the violence.  The city utility cuts off electricity at seeming random points. This dystopian activity is supposed to provide a setting that creates tension and conflict. It doesn’t in part because the story’s internal logic is never quite explained.

The movie opens with a bank robbery that goes bad. The gang leader aka Waikiki (Sterling K. Brown, Black Panther, Marshall, Whiskey Tango Foxtrot) goes soft on the frightened bank patrons. His crew wants to kill them when the bank manager can’t open the vault.  Waikiki decides to rob their personal belongings rather than kill the bank manager when he can’t open the vault. Supposedly this scene shows us that Waikiki really has a heart despite his violent bank robbing occupation. When the gang’s escape goes bad, his brother aka Honolulu (Bryan Tyree Henry, This is Us, Irreplaceable You, Crown Heights) is badly injured and they head to Hotel Artemis.

The hotel is really a state of the art hospital financed by a crime boss (Jeff Goldblum, Guardians of the Galaxy Vol. 2, Thor: Ragnarok, Grand Budapest Hotel). Run by Jean Thomas (Jodie Foster, Elysium, Carnage, Money Monster), an aging nurse, access is only available to those that pay a fee: Concierge medicine for the criminal elite. Once admitted, the patients are given nicknames to maintain discretion. Rules are strictly followed–no guns, no real names, and no killing of other patients. Inevitably, the rules get broken.

The movie has a strong, experienced cast but the movie’s story never really quite get’s off the ground. Foster plays Nurse Thomas with a quirkiness and conviction that keeps the story and characters knitted together. Other strong performances are registered by Dave Baustista (Blade Runner, Spectre, Guardians of the Galaxy movies) as Nurse Thomas’s reliable right hand man Everest and Sofia Boutella (Atomic Blond, Star Trek Beyond, Kingsman: The Secret Service) as an assassin with a weak spot for Waikiki.

Unfortunately, the characters never really leave their lives of crime or evolve from their gangster life. Nor do they want to. If they do, they don’t make convincing commitments to try to change. In short, the characters don’t have identifiable character arcs. Without meaningful arcs, the story’s momentum slows to a crawl even as the action ratchets up.

The film also have several plot holes, undermining each character’s arc. For example, how does a small time criminal have the income to access Hotel Artemis’s state of the art medical procedures? What accounts for Waikiki’s motivation for leaving the gang life?  How did life in L.A. decline so quickly? (The movie, after all, is set just 10 years into the future.)

Rotten Tomatoes critics rated Hotel Artemis 58% “fresh”  while audiences give it a 37%.