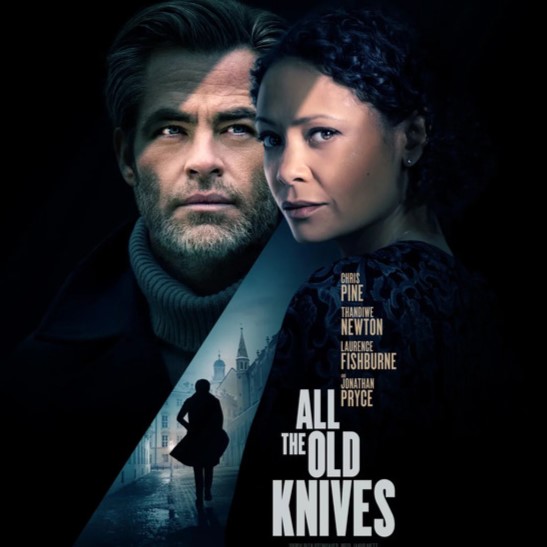 Chris Pine and Thandiwe Newton headline the spy film All the Old Knives, a film noir with oddly predictable twists and turns. Streaming on Amazon Prime Video, excellent performances by Pine, Newton, and their supporting cast grip audiences even as the movie’s pace is more drama than adventure. These performances and a tightly written screenplay by Olen Steinhauer, ensure that All the Old Knives remains a satisfying spy drama and a solid contribution to contemporary film noir.

Told through memory flashbacks using CIA Agent Celia (Newton) and Henry’s (Pine) points of view, the story starts in Vienna, Austria in 2012. The CIA station staff is caught-up in a hostage situation, soon to turn tragic, as terrorists hijacked a passenger jet. Hundreds of lives are at stake. A CIA inspired rescue mission goes south, and everyone is killed.

Eight years later, the CIA re-opens the case. They think a mole collaborated with the terrorists leading to the tragic outcome. Henry is assigned to find the mole by the station chief (Laurence Fishburne).

Soon, the investigation centers on Celia and her mentor, Bill (Jonathan Pryce). Bill is now retired but was second in command at the time of the hijacking. Celia also left the CIA after the attack under murky circumstances. She now lives with her husband and two children in California.

Complicating the investigation is Henry’s checkered past with the CIA. Henry also was deeply involved with Celia at the time of the attack. Henry is assigned the task anyway.

A Winding Tale of Disillusionment and Fear

What follows is a winding tale of perception, discovery, disillusionment, and fear. When Henry contacts Celia, she immediately fears the consequences (although of what is not clear why until well into the movie).

The stakes are raised when Henry has been given permission to eliminate the mole once he finds him or her.

The dueling perspectives and perceptions keep the story fresh and moving. But toggling between these perspectives in the screenplay by Olen Steinhauer, based on his book of the same name, effectively slows the plot. The slower, drama’s pace gives audiences plenty of time to consider the emotional twists unfolding on the screen as Henry and Celia unravel the complicated legacy of their relationship and the events that led to the tragic deaths in Vienna.

A Traditional Suspect Drama With a Dash of Mystery

All the Old Knives is a traditional suspense drama, with a dash of mystery. Steinhauer’s plot and screenplay draws heavily on the tools of the trade pioneered by classic authors such as Agatha Christie and director’s such as Alfred Hitchcock.