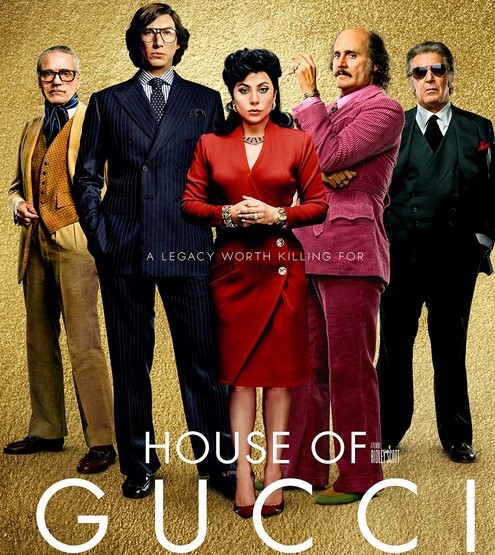 Despite excellent performances by some of Hollywood’s leading starts, Ridley Scott’s (Alien, Blade Runner, Gladiator) House of Gucci never really takes off. This is a shame. Scott has nearly all the critical elements he needs to make for a compelling drama.

The story seems to have natural elements of tension and conflict. The iconic fashion brand purged itself of Gucci family members through a wide range of self-destructive behavior, intra-family feuds, backstabbing, betrayal, and sociopathic narcissism. Ultimately, Maurizio Gucci, the family heir to the brand, was assassinated in 1995.

What could go wrong with story elements like these? The source of these tensions are all fodder for a suspenseful movie, even if someone is already well versed in the realities behind the family history and the fashion industry. Losing control of a global fashion brand is dramatic in and of itself. Add power and personality, and the story has the makings of riveting story telling.

Unfortunately, the movie never gains the momentum necessary to keep audiences fully engaged. The problem is pace, not aesthetics or acting.

Lady Gaga, in particular, shows she is a force to be reckoned with in modern cinema. (She also received a Golden Globe nomination for her performance.) Adam Driver does a commendable job playing a subdued and aimless Maurizio Gucci. Pacino provides a memorable performance as does Selma Hayek as the psychic who befriends Patrizia.

Unfortunately, the movie plods along with almost no forward momentum. Audiences are never given much of a glimpse into the motivations of key characters. Is Patrizia a sociopath? Or is she motivated by power and money? Or her identity with the Gucci family? Unfortunately, almost all the characters lack well defined arcs. The exception is Maurizio, who finally seems to step into his own toward the end.

Overall, the House of Gucci has a weird dynamic. One would think Maurizio’s assassination – a real life event – would be the climatic element. But the story really peaks at Maurizio’s final humiliation as the House of Gucci fully collapses in front of him. The two events, however, seem disconnected. They may even work against each other. These plot points pack surprisingly little emotion or energy into these moments.

House of Gucci is carried by Lady Gaga’s performance. The heavily plotted screenplay, combined with a lack of effective editing, makes for a slow paced drama. Many in the audience will be aware of every minute of its more than two and half hour (158 minutes) run time.