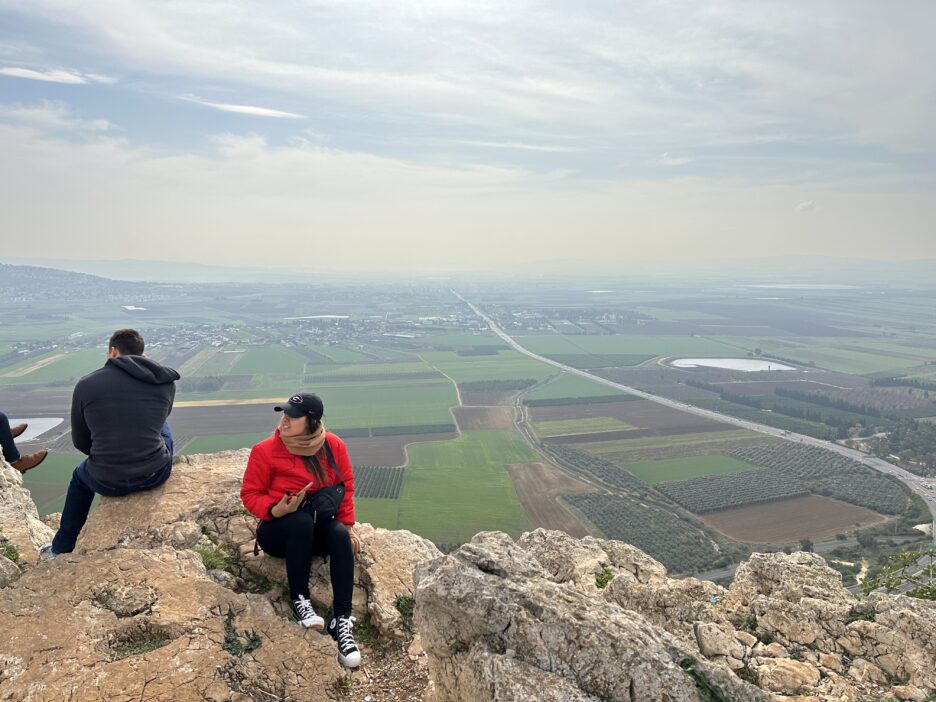 One of the first things to hit me about Israel was its stunning range of its physical and environmental beauty in such a compact area. Israel is about the size of New Jersey in land area and population (about 9 million people). Driving from north to south is about 3 hours – a little longer than my drive from Tallahassee to the Jacksonville Airport (or Pensacola going west).

The pace of our Passages trip was unrelenting. Soi, I got to see a lot of it. The benefit? I wasn’t driving! So I could take in the landscape.

The first place we visited was Alfie Menashe, a controversial Israeli settlement on the western edge of the West Bank. The town of about 8,000 is inside the “Green Line,” the 1967 demarcation between legally recognized Israel and former Jordanian territory now called the “West Bank” (because it’s on west bank of the Jordan River).

The settlement is controversial because it was carved out of the “seam zone.” The seam zone is land between the Green Line and physical barriers – walls and fences – set up by the Israeli government to prevent Palestinian infiltration into Israel. The settlement was also built on land confiscated from Palestinian villages. As our Israeli guide said, depending on your perspective, the West Bank is either “liberated” or “occupied” by the Israelis.

The land is rocky, sparse, and rugged with a lot of scrub brush. The hills are rolling. The fence separating Israel from the West Bank is pretty obvious.  Given the rugged terrain, the housing tends to be higher density and compact. (The Muslim settlements have minarets, tall skinny towers next to Mosques used to call people to prayer.)

Lush farmland greens up the valleys of northern Israel

Driving north from central Israel toward Nazareth and the Golan Heights, the land flattens and is richer in texture. This land is an agricultural breadbasket for Israel – dates, citrus, grapes, tomatoes. Turns out Israel is agriculturally self-sufficient.

From Mt. Precipice (more on this later), the richness and beauty of the Jezreel Valley is sweeping and impressive. Historically, this valley connected the Mediterranean Sea to the Sea of Galilee (which is the northeast of these pictures). It also has a ton of Biblical significance, the location of some of the Israelites greatest triumphs and defeats. For Christians, this valley would also be the site of Armageddon.

The Golan Heights rises to 9,232 feet above sea level and provides a stunning view of Syria. On a clear day, we are told we can see Damascus. The fertility of the soil is evident across the regions of northern Galilee and southern Syria.

Back into the valleys in central Israel

Traveling back south to Jerusalem, the topography becomes much more hilly again. I didn’t see much agriculture, but the valleys separating parts of the region were impressive. The Kidron Valley, for example, separates the Mt. of Olives from the Temple Mount and other major sites. The hills provided natural defense from attackers, and water availability played a critical role in the establishment of Jerusalem as a fortification and central place.

Back to farmland in southern Israel and Gaza

Traveling further south and west toward Gaza, the land flattens and opens up again, revealing lush, fertile areas for cultivation again. Once again, we were seeing valleys that were sites of major biblical events, including the area where the shepherd boy David confronted the Philistine army and Goliath.

To the east, near the Dead Sea, just one hour from Jerusalem, we find ourselves in the Judaean Desert. The Dead Sea is an astounding 1,412 feet below sea level, the lowest “land-based” elevation on Earth. It’s also ten times more salty than the Atlantic and Pacific Oceans, making swimming an interesting experience in floating.

The views of the desert landscape are stunning. Masada, the site of the Jews last stand in the Jewish revolt against the Romans in the first century, rises 1,300 feet over the desert and the Dead Sea, surrounded by stunning cliffs. From the top of Masada, the borders of former Roman campsites can still be seen.

By the time we ended our trip, the port of Jaffa and Tel Aviv were striking in their modernity and accessibility to services. Tel Aviv is the main hub for Israel’s tech sector.